I attended a panel discussion yesterday a #BIT17 between educators and education IT support that jumped up and down on a number of hot button issues.  One thing that's always struck me about attending a conference like ECOO is the point of view of the support people in education; they don't seem to get the support piece.  Our function is to educate.  Not provide PD for teachers, or build an IT network.  Those things are there only to support the main function of what we do: educate children.

In the course of this discussion it was suggested by curriculum support people and board IT professionals that teachers should be spending an inordinate amount of their time closely reviewing the legal documentation around software applications and vetting software.  I thought we had people for that.  Having a teacher do that is akin to pulling all your commandos off the front line in a war and having them do paperwork.

Once I got past everyone who doesn't work in a classroom earnestly telling me I should be doing their job for them (odd that teachers never suggest that of other education employees), we continued to pursue the topic of heightened responsibility - the term that was used to shut down my suggestion of using your online PD community to source new technology ideas for your classroom.  From my point of view, if a number of educators I know personally suggest trying a new app or other piece of educational technology, that's a fantastic resource.  I was told by a panel member that this stifles innovation.  I always thought it was a source of innovation.  Perhaps this was a misunderstanding in terminology.  I used the term crowdsource to describe my process of vetting a new piece of software.  To the CIO and curriculum experts on the panel this meant trusting strangers on the internet.  That isn't my experience with online learning communities at all, it's anything but dealing with unsubstantiated strangers.  Maybe that's how they tentatively work online though.  Let's call that one lost in translation.

Michelle Solomon from the Association of Media Literacy was on the panel and created an awkward moment when she suggested that using even board/ministry sanctioned software like Turnitin.com (a private, for profit company that uses student data to make its money) was morally ambivalent.  The CIOs and curriculum experts were quickly able to compartmentalize that truth and function again within their fiction, but it knocked the floor out of what we were talking about for me.

When describing themselves and their school boards, the IT people in the room said, "we're a Google board" and "we're a Microsoft board" as a means of stating their, what, affiliation?  Their purpose?  You're public school boards here to promote and deliver public education; what you aren't is an affiliate of a multi-national media company that undermines democracy and avoids paying taxes.

The 'stop loading malware onto our networks/teachers should be happy with less choice and spend more time pouring over software legalize' angle was designed to create a locked down, heavy drag system where innovation and moving with trends in data management would be years behind what everyone else is doing.  I have to wonder just how bad the teachers-installing-malware issue is, because I haven't heard anything about it.  This invented and absurdly low threshold for software access (watch out, everything might be infected!) then had the blanket of heightened responsibility thrown over it all.  Of course, you know what the answer to all these technically incompetent teachers installing malware is?  Get a corporate system!  Become a Gooplesoft board!

Except, of course, those earnest, well meaning multi-nationals, from their totalitarian labour to expert accountants, aren't in it for education, they're in it for money.  You want to talk about malware?  It's all malware!  Google promises not to advertise to your students while they are in Google Apps for Education, but they can't stop mining data on what students do in GAFE because Google is a data mining advertising company, it's how they make their money.  They always serve themselves first. 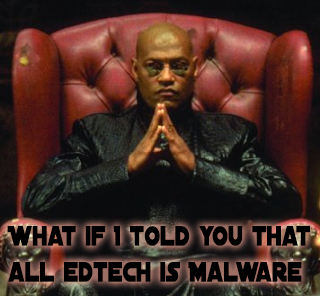 I left this talk with my head spinning.  I feel like we were talking in circles about a fiction that doesn't exist.  We could have a self-built, non-corporate technology foundation for Ontario Education, but it would be hard work and would require technical talent to achieve.  Why do that when we can give in to the hype and Vegas-like allure of the educational technology juggernaut?  Pick your poison, but if you're going to use educational technology none of it is blameless, it's all built on shifting grounds undermined by hidden revenue streams.

At one point it was suggested that we need to build media literacy in order to battle this situation.  It needs to start with the educators and technologists working in the industry.  If we're too busy drinking the koolaid to recognize just how twisted this all is, then there is little hope of graduating students who anything more than consumers.