The other day I asked my senior class how millennials listen to music when they get their first car.  They seemed confused by the question.  I've noticed that young people don't like to manage files any more (many grade 9s don't know how to find files on a desktop), and since music turned into file management around the turn of the millennium, it's all about file management these days, isn't it?  It turns out it isn't. 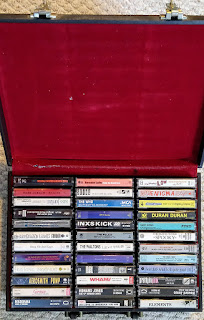 When I started driving near the end of the 80s the couple of cassettes in my pocket turned into a briefcase of tapes.  That briefcase contained whole albums by artists, both what they released and B side stuff.  When you went to a concert you'd hear the released stuff, but you'd also hear the unreleased songs, and the majority of people in the audience were very familiar with it; they were fans of the artist who had spent a lot of time in a long form medium (the album).

That process continued into the 90s as my tape collection evolved into compact disks.  The smaller form factor resulted in flip books of disks.  The plastic box with the album art on it got left behind, but I was still listening to whole albums and collecting the works of specific artists in a detailed, long form, album based manner.  I was introduced to mixed tapes in the mid-90s by my hot, new girlfriend, so the idea of designing your own playlists have been around for a long time, but albums were the main point.  We spent a lot of time curating our collections.  You'd discover new artists in friends' collections, you'd hear unreleased music while in their car.  At a concert you knew the words to every song, even the unreleased stuff.  What happens at concerts nowadays?  They play their released songs only and then do popular covers so everyone can sing along? 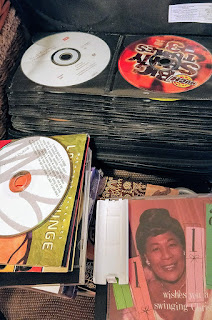 I went digital early.  From Napster to modern mp3 distribution, I kept cultivating a locally based, artist focused collection of music, but that isn't the way that the industry has gone.  Nor is it the way that teens today relate to music.  The gigs of music I've curated aren't the future, it's me using modern tools to imitate my past relationship with less fluid, physical mediums, but is that a bad thing?  I'd argue that my relationship with an artist's music was deeper and more intimate because of the limitations of our mediums.  When you have the collected works of Dire Straits (six original albums plus four live ones) on hand, you are diving deep into what they did.  Surely deeper familiarity breeds a more loyal fan.

Kids are still into music, but the digitization of the medium has resulted in a much more fluid relationship with it.  I frequently watch students randomize YouTube videos as background music and then click through a song in the first ten seconds if it isn't grabbing them.  Their's is a high input low attention threshold relationship with the artist.  You can hardly blame modern artists for producing shallow, catching songs - the cloud based medium that has descended upon us pre-selects that kind of music for success in a fluid, digital landscape.

Laying on a bunk at air cadet camp in Trenton on a hot, un-air conditioned summer night in 1985 and getting lost inBrothers in Arms on a walkman isn't something millennials consider doing with music, is it?   We started doing the skip a song thing on CDs in the 1990s, but it was such a pain on tape that you'd just listen to the song.  In doing so you sometimes came around to liking something that didn't grab your attention in the first ten seconds.  At the very least you're experiencing an artist's thoughts and music in a more detailed fashion.

When I asked my students what they do when they get a car for the first time they were confused.  Spotify was the answer (it turns out Spotify is the millennial answer to any music related question).  I get it if you're swimming in wifi at home or at school all the time.  Sure, it's bandwidth and data ain't free, but it is if you're a kid in 2017 for the most part.  But what do you do when you're going for a ride in your first car and have no locally curated music to take with you?  I figured they'd all have MP3s on their phones, but they don't.  Spotify premium was the answer.  That's ten bucks a month to listen to whatever you want, and you can evidently save it locally if you're on the road, but do they?  If you've never had to manage a local music collection before I suspect it wouldn't even occur to you to do it this late in the game, it'd feel too much like work.

So the young driver's solution to the problem of never having cultivated a personal collection of music is to pay for a monthly cloud based service and then now begin cultivating a local music collection?  You could just hope your phone is willing and able to bring down all that data in a continuous way, but that's an expensive prospect in Canada.  With some of the highest mobility costs in the world and lots of long car trips in store, Canada isn't a comfortable place to be cloud dependant for your tunes.  If you end up not being able to pay the ten bucks a month for the pro version of Spotify, you lose all your local music.  Just when you thought the digital native's relationship with their tunes couldn't get any more ephemeral, it gets more so.  When you live in the cloud you don't really own your data, do you?

Another problem with cloud-based digital music natives is the interactivity.  When you're used to constantly inputting changes to infinite cloud based music it's second nature to go looking for whatever strikes your fancy, or skip through the play list looking for whatever drifted into your mind as a must-listen-to song in the moment.  How long are your eyes off the road while you're doing that?  If that's your relationship with music then you've trained yourself over many years to surf through your fluid, digital music with frequent inputs.

I wonder how this is reflected in statistics...

The texting culture is generally blamed for the problem of distracted driving, but I suspect this learned, constant input approach to music has a part to play in it as well, especially with younger drivers.

The long and the short of all this is that the music culture of young people is completely foreign to anyone over thirty.  For people who got into music before it got very cloudy in the twenty-teens, curating your own local music means you can jump into a car or go on a trip and never once wonder about access; you own your music.  Because of that effort you've probably also got a closer relationship with the artists you call your own.  For the cloud dependent millennial that move to vehicular mobility produces a number of expensive problems.  Of course, since you never really got into any one musician when you were younger because listening to more than one third of a song is boring, maybe you don't care.

This content has been marked as final. Show 3 comments